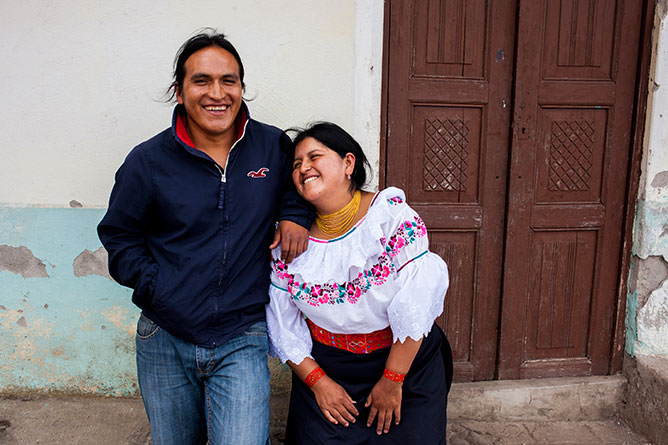 For Luis and Marina, the opportunity to share their handmade pieces with the world is a dream decades in the making. Growing up near Otavalo, Ecuador, Luis loved the tagua seed crafts that were traditional to his region. He dreamed of one day learning the jewelry trade and earning a living with his own two hands as an Artisan.

When Luis and Marina got married and started a family of their own, they worked hard to earn a living any way they could. In the rural region where they lived, jobs were scarce. People living in their village would find work for a week at a time, and faced constant uncertainty about how they would support their families the next week. Many rural-dwellers were forced to immigrate to the city in search of work. But because cost of living in the urban areas was too high for most rural families, the breadwinners often had to leave their spouses and children behind in the villages. 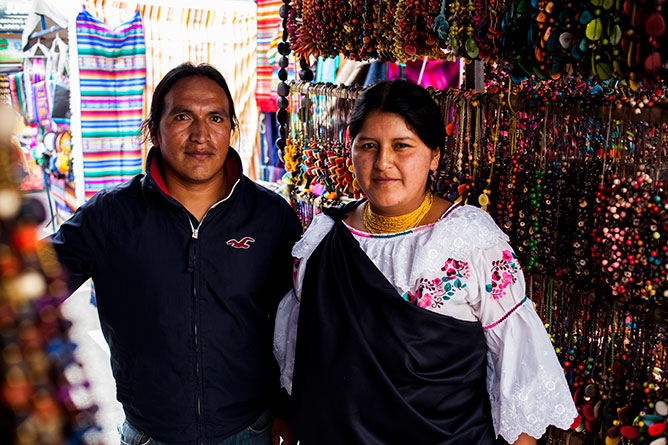 Luis and Marina dreamed of finding a way to earn a living for themselves while keeping their family together at home. Luis would take odd jobs in construction and agriculture in order to afford the family’s basic necessities, but he continued to harbor his dream of becoming an Artisan.

Eventually, some of the couple’s family members suggested that they try to open a stall in the local market to sell goods made by other craftsmen. Then, if they earned enough, they might be able to purchase materials to make their own pieces. Opening their own stall would mean that Marina would be responsible for representing the family in the market while Luis did manual labor jobs. 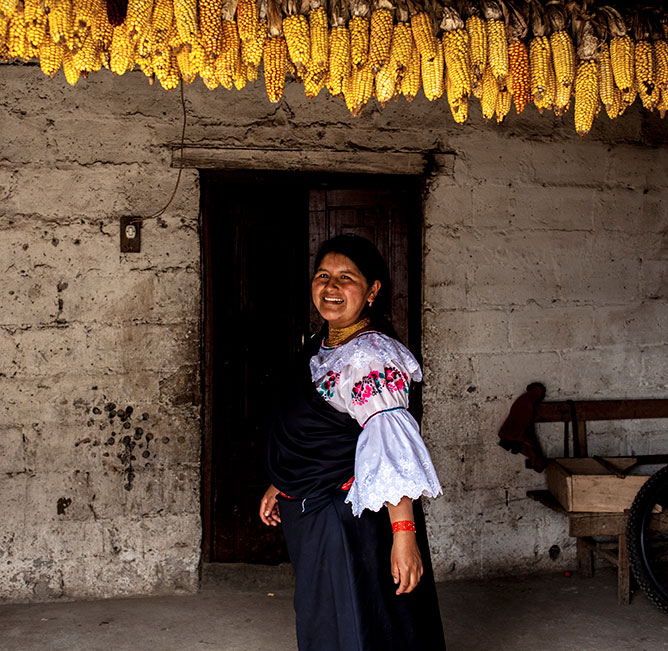 “When I went into the market to find out about getting started, I was so overwhelmed,” Marina reflects. “There were so many people selling there. I didn’t know how to barter or how I would communicate with the English-speaking tourists who passed by.”

Marina was worried about the new challenges she would face in the market by herself. But she knew that this was a chance to earn additional income for her family and to help support her children – so she gathered all her courage and jumped in. “I was at the market every day, rain or shine,” Marina shared. “I started very small. I would buy a little from other makers, then sell a little; buy a little, sell a little.” 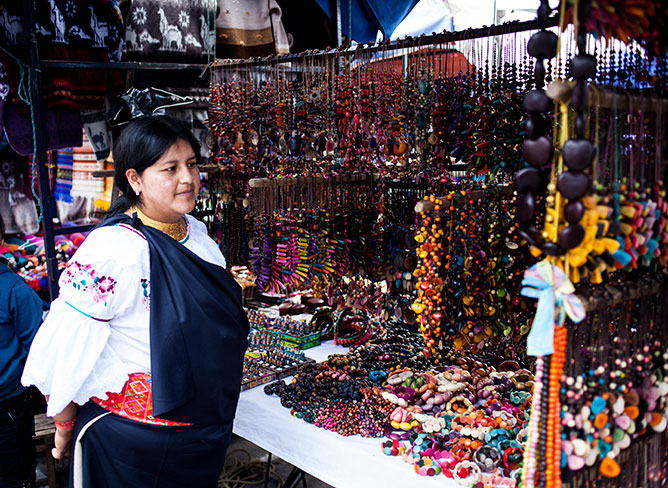 Marina kept at it day in and day out. As they began earning a little extra money in the market, Luis’ dream of supporting his family as an Artisan seemed a little more achievable. Eventually Marina had earned enough money to purchase one sack of seeds for Luis to transform into pieces of handmade jewelry. Luis continued to work manual labor jobs during the day, but he would wake up very early every morning to assemble jewelry out of the seeds they had purchased. Then Marina would gather up the pieces, load up her children, and travel to the market. 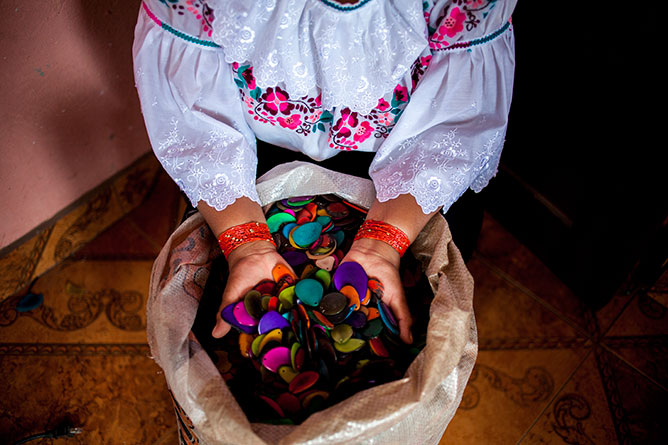 Eventually their pieces began to get the attention of buyers who discovered them in the market. They received a few large orders, but each buyer would only place one order and nothing more. Luis and Marina would earn enough money to continue making their pieces, but what they wanted was a reliable source of income. They needed a growing marketplace and sustainable orders. 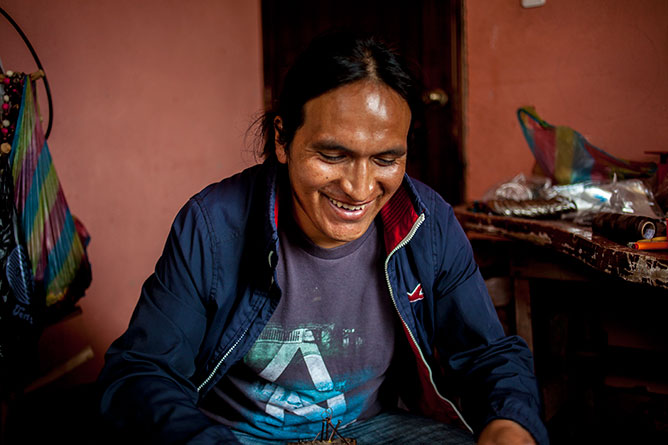 It was during this time that Luis and Marina met Tamara, Noonday’s Manager of Artisan Production and Sourcing. Tamara was scouting out new artisan businesses that Noonday could partner with in Ecuador. She was immediately drawn to Luis and Marina’s high-quality pieces and their vision to create opportunity in their community.

Luis and Marina received their first Noonday order for a brilliant yellow necklace – the aptly named Sonrisa Necklace. It has been one year since they started making pieces for Noonday, and in that time they have begun to grow their operations and are offering work to family members and neighbors who need it. Rather than rely on the local marketplace, today they have orders they can count on. “All our dreams have already come true,” Luis shared. “Now we have to learn how to dream even bigger.” 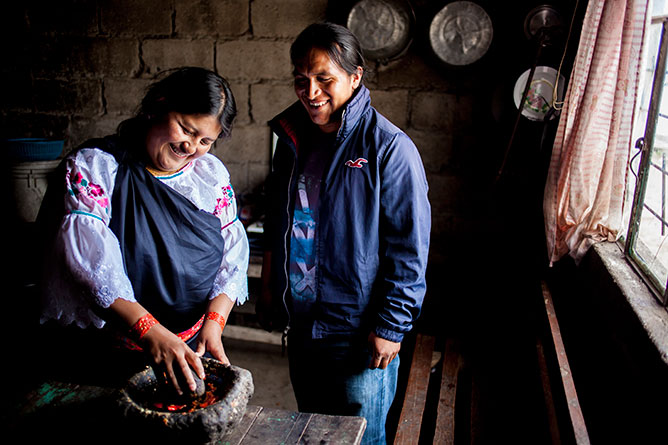 Luis and Marina are just getting started. Now, they look forward to being able to provide sustainable work to even more people in their community – and we love that we get to come alongside them as they grow their business. Through capacity building initiatives, Noonday is committed to helping Luis and Marina take their vision and make it into a reality for themselves and other families like theirs. 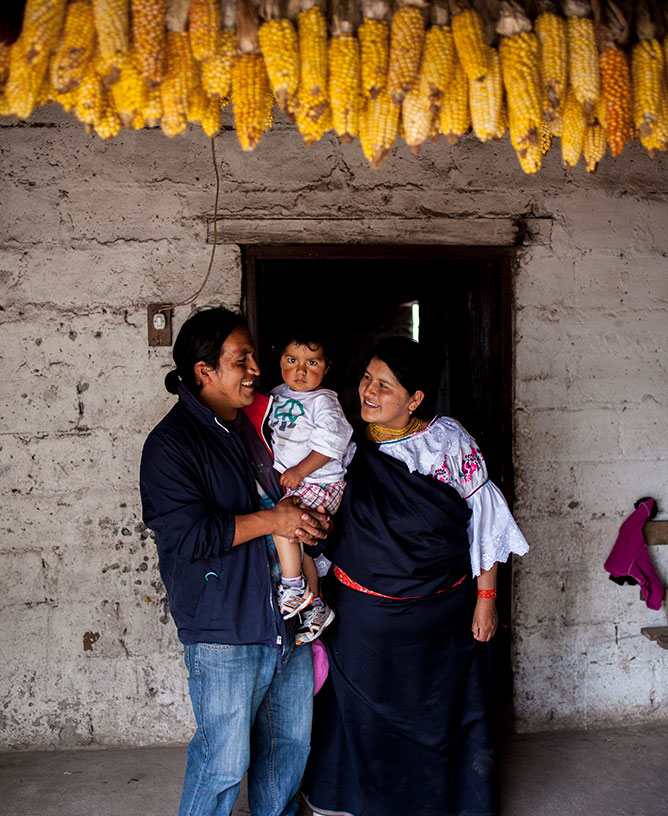 One of the best things about their new business has been the chance to keep their family together. “It makes me happy to be working side by side with my husband in this way,” Marina shared. “I never thought I would have the opportunity to make a living as an Artisan. I am happy to be able to work with Luis and support this dream.”

It’s a dream that just keeps growing — and we can’t wait to see where it takes this talented couple.

The Skyward Necklace, handmade in Ecuador