Noonday Collection and the Fight Against Human Trafficking

The International Labour Organization estimates that more than forty million people around the globe are living in modern slavery today. Of these, about 75% are women and young girls. These numbers are overwhelming. Yet to most of us, the problem feels far away, distant and too big to tackle.

Amazingly, the term “human trafficking” has really only become widely known over the past two decades. By definition, it involves the use of force, fraud, or coercion to obtain some type of labor or commercial sex act. Globally, we are learning that trafficking can happen without smuggling, chains and locked doors. It can be happening to people who seem to be freely walking down the street. Your clothes, coffee and chocolate could be made at the hands of modern slaves. What has become very clear is that human trafficking victims all have something in common — vulnerability. But what was still unclear to me a few years ago was how I could help fight this war on a hidden machine, how I could fight for the vulnerable from where I was.

One day, thanks to the wonders of social media, a friend shared a video of an organization doing a sting operation to liberate kids who were being trafficked in India. I discovered that this organization, The Exodus Road, was headquartered in the city I live in, Colorado Springs. I was fascinated — an American family living in Thailand working with orphans had stumbled into the problem and plight of trafficked victims in that area, and they couldn’t turn away. Their willingness to do what they could to help free trafficked kids in Thailand had developed into an outreach to seek out and liberate victims of trafficking all over the world. So, when a sweet friend reached out, asking if I would join her in supporting the fundraising efforts of The Exodus Road, my answer was, “Yes!”

Meanwhile, I had the opportunity to attend the International Justice Mission’s LIBERATE conference with my husband in Dallas, TX, during the fall of 2018. IJM began just over twenty years ago by an American lawyer who found that the justice system in so many countries was flawed and corrupt. Their mission of freedom for those trafficked and conviction of traffickers is inspiring and has sent shock waves into the world of modern slavery. I had found another anti-human trafficking organization to support.

Still, I wondered, “What else can I do? Is human trafficking preventable?” As I heard the stories of redemption through The Exodus Road and IJM, I realized that the vast majority of victims in countries around the world lived in vulnerability due to poverty. Sarah Ray, co-founder of the fair-trade company, Yobel Market, says it like this: “Poverty breeds desperation, and desperation invites risk.” It is because of this domino effect that so many men, women, and children find themselves enslaved. If they have opportunities for dignified work, jobs that pay fairly and work that enables them to provide for their families, there is no longer a need to risk security and safety.

My dear friend Brooke Warnock has been a Noonday Ambassador for over four years. She is passionate about the work of Noonday, and it was through her that I learned about Noonday Collection and its mission to create jobs for people living in vulnerable places all over the world. Noonday literally gives people the opportunity to work their way to freedom from poverty by creating access to a marketplace in the USA. I might have also been lured in by all of the gorgeous art you can wear, handmade by Noonday’s Artisan Business Partners. I hosted a Trunk Show with Brooke, and the way she spoke about hope for the Artisans and the impact we could make just by shopping was unlike anything I’d experienced.

I decided that if I was going to buy jewelry in the future, it would be fair trade and preferably Noonday. I realized that by being intentional about choosing fair-trade products, my purchase has real power to alleviate poverty, which in turn combats vulnerability for so many and ultimately removes a root cause of human trafficking.

It’s estimated that one Noonday Ambassador can support three Artisans and their families through the sales of their work in one year. That is significant impact. Those are three families who can stay together. Three families who can feed their children, pay school fees, and even save up for their own dreams. After a year of deliberation, I chose to say “yes” to the opportunity of becoming a Noonday Ambassador, becoming an advocate for people who are eager to work hard to not just sustain themselves and their families but to overcome poverty and thrive. My support of this mission meant that more people would be fortified with dignified work and self-worth and were less likely to be drawn in by the schemes of human trafficking.

Here’s the crazy thing. We live and work in a country where the gift market is estimated at $130 billion plus each year. According to Jane Mosebacher Morris, author of Buy The Change You Want to See, “Gifting is its own retail category, like accessories or housewares.” What Noonday Founder Jessica Honegger realized was this: we women like to gather, and we like to shop for not just ourselves but for the women that we love and want to encourage. What an incredible opportunity for Artisans in need of a marketplace! In a beautiful partnership, Noonday meets these Artisans where they are with the support they need to have a thriving business.

I wondered, though, was this connection between providing dignified work and preventing human trafficking just idealistic, or was there real traction there? I asked two dear friends who have built their careers on fighting human trafficking and advocating for human rights to discuss the possible correlation. I met with My Lo Cook, former Director of Strategic Initiatives at Polaris, a leading organization based out of D.C. in the fight against human trafficking and current Director of Development for the Rocky Mountain Immigrant Advocacy Network in Denver, Colorado. She agreed that the mission and work of Noonday plays an integral role of preventing human trafficking. We covered a lot of ground about different tactics used by organizations fighting modern slavery, and then My mentioned something that I didn’t expect to walk away with.

What we can’t measure, or underestimate, is the value we bring to women and men who are experiencing dignified work for the first time. Many Artisans can and do taste freedom from poverty as Artisan Business Partners of Noonday, and it comes with the unfamiliar but blossoming pride in their work. That a stranger thousands of miles away would spend money on something they made with their hands means more than just a meal. It sends a message of value. And that’s not something that can be measured, but its significance to human existence should not be underestimated.

I think of women in Afghanistan, rebuilding their lives after the devastation left by the Taliban, who have created beautiful, hand-embroidered Christmas ornaments for Noonday. I wonder what these women talk about, what they laugh about, as they sit together in a shared community of pain, healing and hope, and imagine where their art will go. Their work is sought after, their skills are valued, and now they have income and security because of it.

Laura Parker, Co-Founder, President and Chief of Communications Officer of The Exodus Road, and gifted storyteller, shared with me glimpses from their work abroad that are just heartbreaking. While The Exodus Road is focused on the search and release of victims of human trafficking, she agrees that in the majority of cases, poverty is at the root.

People are making choices for themselves and their children that invite great instability and risk because they have no other options. They leave their villages and towns because work is scarce, they risk handing over their passports for travel to another country for promised “work,” they send a son or daughter to the city with a trusted family member for a chance to go to school, only to have their trust betrayed and their child missing. What becomes of a person when their own flesh is bartered for?

Laura tells the story of two women in South East Asia who had been victims of trafficking and now knew no other work other than that of exploitation and felt they had nothing else to offer. They were hired by Laura to just sit together and tell their stories for research purposes, and as Laura retold to me their gut-wrenching history, she expressed her surprise at how transparent they were about their pasts. Someone was finally listening.

When they finished, they were thanked and paid and not long after leaving, returned, smiling, to thank Laura and her team. They explained: this was the first time in their lives that they had been paid for dignified work. What if they had been offered the chance to work in a Community Workshop as young women? What if their mothers and fathers had experienced steady work as they raised their children? Their stories could have been different, and they still can be.

Noonday’s Storyline Collection, handmade by women overcoming exploitation in South East Asia, was designed specifically to create an alternative to sex work. Women are given counseling and rehabilitation services, along with the dignified work of making this gorgeous and meaningful jewelry. Thanks to the enthusiastic support of this collection over the past couple of years by customers, Noonday’s partner organization was able to hire a full-time advocate to connect with these women and build a relationship of trust as she invites them into the work with Noonday’s Artisan Partner. Noonday also partners with an organization in Ethiopia doing similar work of offering a year-long program focused on healing, which is often followed by a job with Noonday’s Artisan Partner in Addis Ababa.

What I love about Noonday Collection is that we are proactive and do not lose sight of our goal for building a flourishing world where children are cherished, women are empowered, people have jobs, and we are connected. Next month, November 2019, Noonday is partnering in fundraising efforts with International Justice Mission (IJM). Our goal is to fund up to 3 rescue missions ($20,000) with rewards money designated by Trunk Show Hostesses. For each IJM Rescue Trunk Show, Noonday will donate 10% of sales to support the fight against human trafficking. That’s double impact — not only do the Artisan Partners around the globe benefit from sales, but now IJM can receive additional funds to span their reach even farther and deeper into corrupt corners of the world, and we can be a part of that great mission.

Noonday is making dignified work a reality for thousands. With every Ambassador working her business on behalf of these Artisan Partners, with every Hostess who gathers her people in community for a couple of hours, and with every customer who chooses to buy fair trade, real change can and will happen. In just nine years, there are countless stories of transformation and freedom from poverty because Noonday exists and because of your support. So, do not give up fighting for humanity, and do not forget that the mission to prevent human trafficking is made up of small choices that add up to value, opportunity and stability. Small choices, one after the other, can make the difference between slavery and freedom.

If you’re interested in learning more about fighting human trafficking, I suggest the following organizations and resources:

Stephanie is a Colorado native who loves spending time in the kitchen and who’s always had a hunger to explore the world. “Traveling has shaped my views on so many things,” says Stephanie, “It is definitely a foundation for my connection and passion for the work that Noonday creates for our Artisan Partners.” 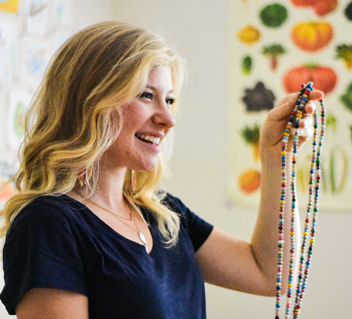 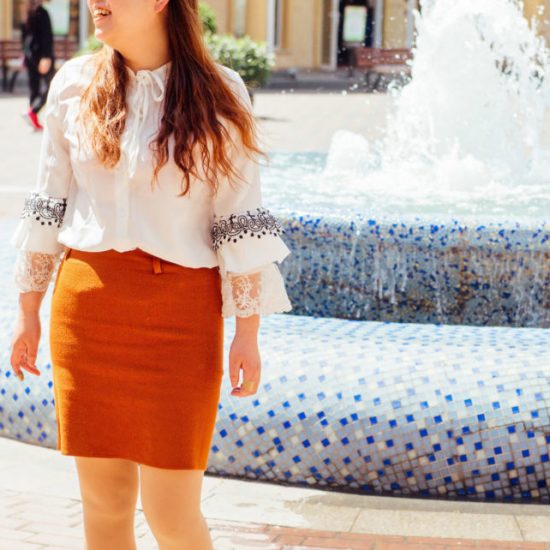