Noonday Collection partners with an artisan business in Haiti that is passionate about creating opportunities that empower Haitian families to thrive. Today on Flourish, we want to introduce you to a few of the talented Haitian Artisan partners who make Noonday’s leather and metal pieces.

Haiti is a small, beautiful country in the Caribbean that shares an island with the Dominican Republic. Haitians take pride in the fact that their country was the first to declare independence during the era of colonialism. A history of political unrest and natural disasters have made poverty a serious problem in the country. Unemployment hovers around at 40% and over two-thirds of the Haitian workforce is informal, meaning there is no guarantee a laborer will have work from one day to the next. To address this problem, our partners in Port-au-Prince works to providing dignified jobs to Haitians who need them. They pay fair wages and are committed to providing regular work their employees can count on. Read on to meet some of the talented Haitian Artisans who create Noonday’s pieces! 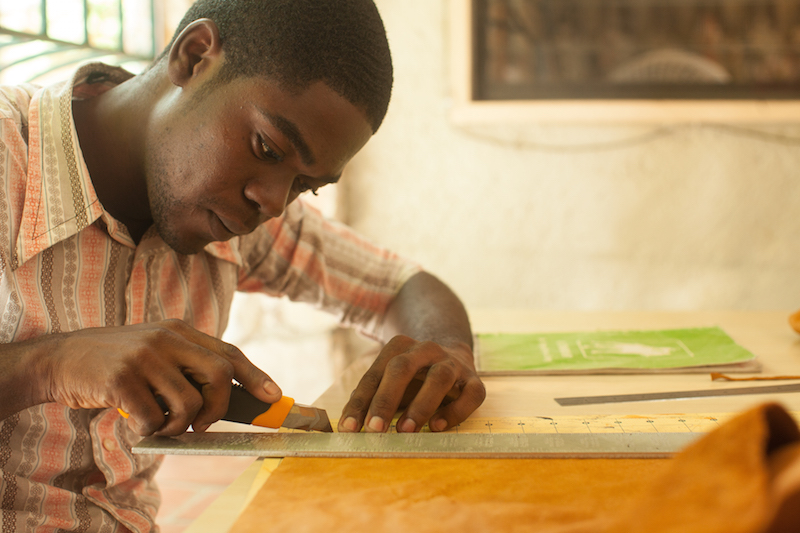 Joel is the head tailor and pattern maker for our business partners in Haiti. He first learned to sew from his aunt as a child. When he didn’t have money for a backpack for school, Joel took apart some jeans he had and turned them into a backpack. The backpack was so nice and popular that other students wanted to buy one. At the time he couldn’t make more because he didn’t know how to create patterns, but he began to dream of one day running his own business making things people would love to buy. 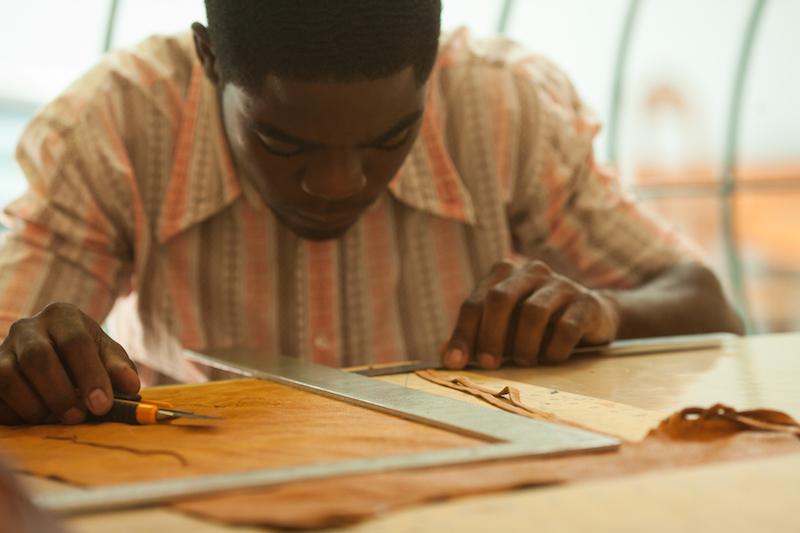 Now that Joel works with the artisan business, the business’ owners are working with him to little by little get him closer to achieving his dream. Shortly after that he started working with the artisan business, Joel attended a seminar to learn about basic pattern making techniques. He then used what he learned and started producing the original backpack he made in school! The business owners say that Joel is always up for a challenge and loves creating new designs. He enjoys training others in new techniques and is determined to never stop learning.

Renal: Metalworker & Dad who drives the neighborhood kids to school 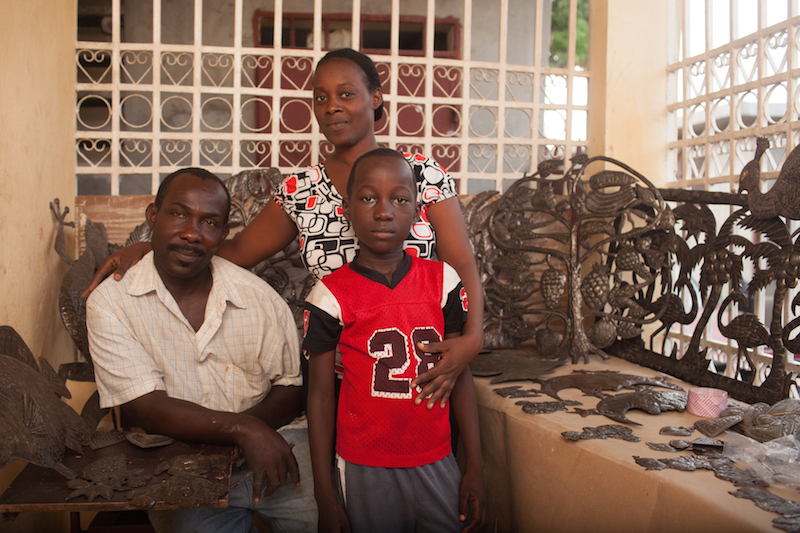 Before Hurricane Sandy, Renal ran his own workshop and had a storefront where he sold his metalwork pieces. When the storm hit Haiti, however, his workshop was wiped out completely. He didn’t know how to start again, and after a few months grew despondent about his chances of finding work. When he heard that our business partners had good work to offer craftsmen, he was thrilled. More than anything, he wanted to have the chance to earn money to support his wife and young son with his work. 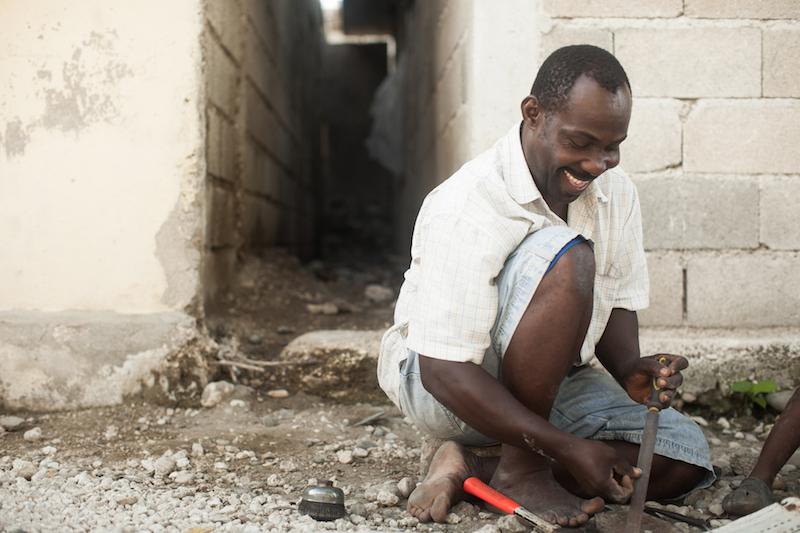 Noonday’s orders were the first work he got after teaming up with the artisan partners, and they provided him with enough income to get his business up and running again. With his family’s immediate needs taken care of, Renal was able to repair his broken down “tap tap” truck. He is now able to take his son, as well as the other neighborhood children, to and from school. Having a working vehicle is a big accomplishment in Renal’s neighborhood. Being able to use it to give back to his community has filled him with pride.

Michele Ange is the head manager of the artisan business’ jewelry program. She is from a village six hours north of Port au Prince called Grand Praix. Michele Ange is amazingly talented at intricate beadwork jewelry and has long dreamt of using the opportunities she has been given to reach others. She has a heart for the women of her home village and with support from our partners recently started her own business there! 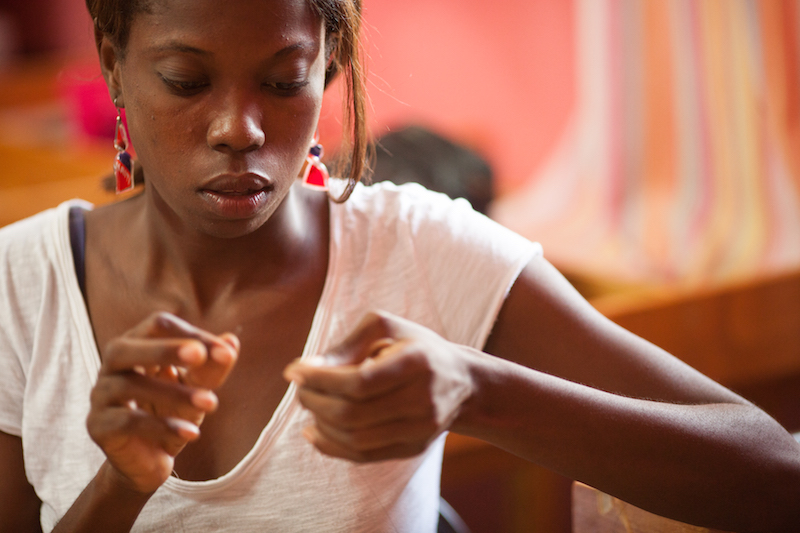 Our Artisan Partners are thrilled to help Michele Ange grow her jewelry business and use the skills she has developed to create opportunity for more people in need of jobs. She recently trained eight women in her village who will receive fair wages and the chance to care for their families with the work of their own hands – an opportunity many Haitians only dream of. 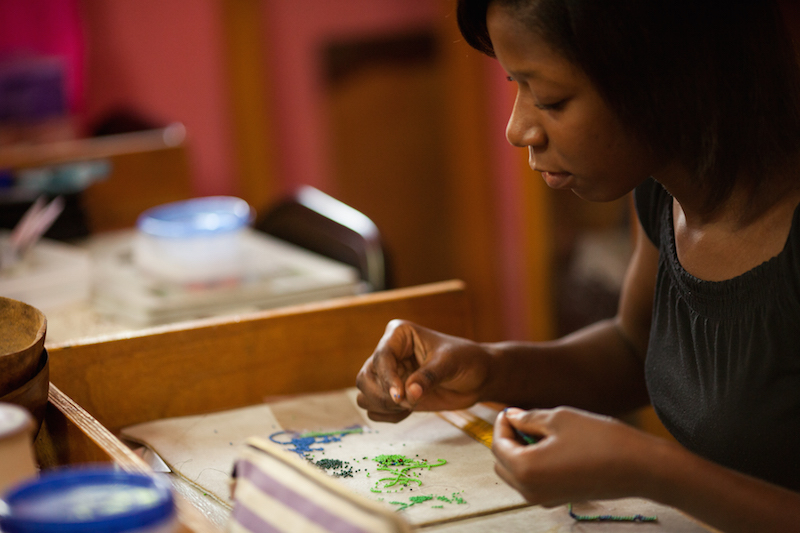 Rachelle is also a part of the business’ jewelry team and is particularly talented at making pieces that involve complicated beadwork. In addition to being a vital part of the jewelry making team, Rachelle is also currently in school. Her commitment to education doesn’t end with her own studies, however – her earnings at the workshop are allowing her to pay for her younger sisters to go to school too! 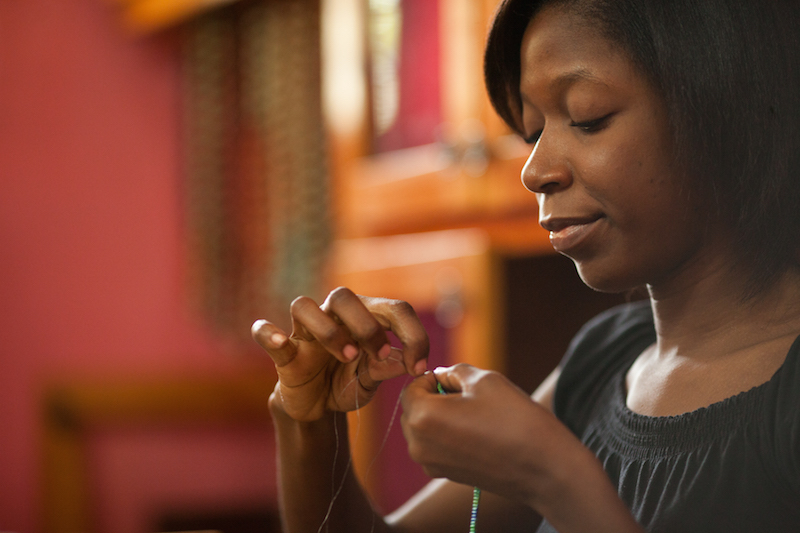 Rachelle’s friends in the workshop say that Rachelle can be reserved and quiet at times, so they always love it when they can make her laugh. Rachelle is a woman who seems to have no shortage of time and assistance to give to others. In addition to her work and schooling, she has also volunteered to help Michel Ange train the new ladies from Michel Ange’s village, so that they too can have the chance at a good job and fair wages. 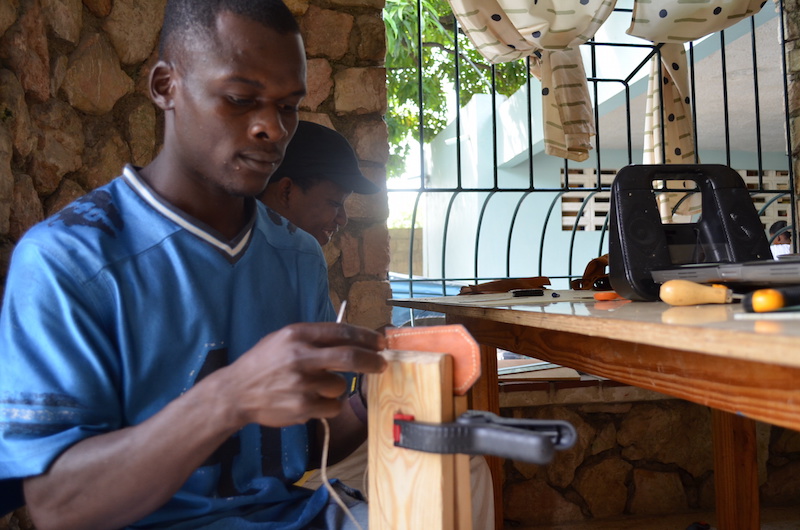 Cenise is the head of the group’s leather program. The artisan business used to rent out a workspace where Cenise was the “yardman” – he tended to the grounds and served as a security guard. Although he was grateful for the job, Cenise never had a knack for it and would often make mistakes. The owners of the property decided to fire him, but the owners of the artisan business stepped in and were determined to try to help Cenise. During their downtime, they began teaching Cenise how to sew leather by hand. They even connected him with Jack, a Haitian leatherworker who had been practicing the craft for decades. Jack helped Cenise learn the basics, and it soon became clear that Cenise was a natural. 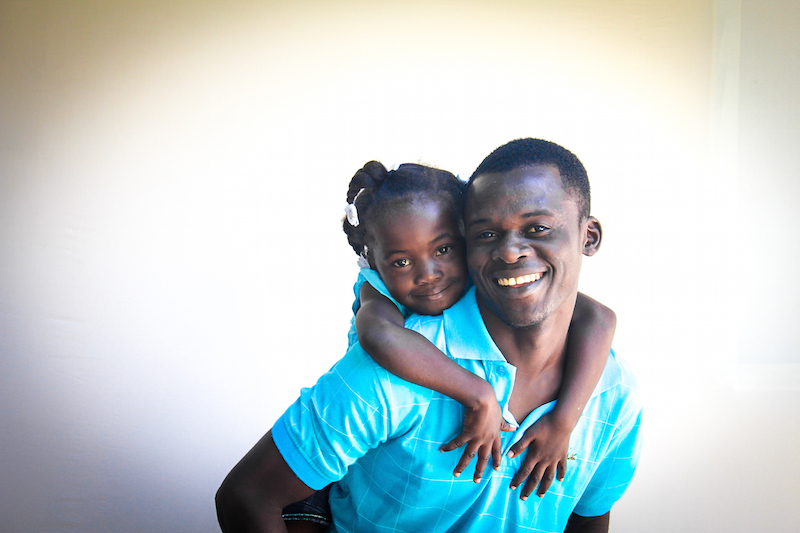 He continued to grow in his craft and today he leads a team of 15 other leatherworkers! With his fair wages, he is now able to support his daughter, Juliette, and ensure she receives the opportunities she deserves. Not only that, but he also has a job where he can use his natural gifts and talents to create beautiful things. The confidence he has gained as a result of his work is undeniable.

To see all of the pieces made by our talented Haitian partners, visit the Shop Haiti section of our website!