Choose to Be a Gatherer This Season

It’s tempting. So incredibly tempting. A bottle of red wine I purchased the other day, that 85% dark chocolate bar I have been hiding from the kids and Netflix’s new assortment of movies. I’m not saying it’s wrong to indulge in the occasional Netflix escape. Nor am I saying that we don’t deserve a night off. But here’s the deal: It can’t be the norm. It can’t be every night. It can’t keep us from gathering people. It just can’t.

So many obstacles can keep us tucked comfortably in our homes, but honestly not a single one of them is good enough to not gather. Gathering people is the essence of human nature. It is the root of every relationship. It is the catalyst of real change.

It All Started with a Trunk Show

Over the last four years as a Noonday Ambassador, I have gotten more passionate about gathering people together—and more creative in how I do it. And through these experiences, I have learned no less than a thousand things about myself and others. The art of gathering people is just that…an art form. Like any other art form, the more I gathered, the more I wanted to do it! Soon I became known as a gatherer of people. When I tell people I am an introvert, they do not believe me. Introverts tend to feel drained after socializing and regain their energy by spending time alone. That is true of me, too—and yet, I can’t stop creating opportunity for people to come together!

My first gathering was the day I launched my Noonday Collection business with my very first Trunk Show. This was nerve wracking from the very beginning. How do I invite people? Will they want to come? What do I say? Is my house nice enough? Will my children behave? Do I have to talk in front of people? What will I serve to eat and drink? These are the questions I asked myself as I prepared. As time went on, I grew more confident both as an Ambassador and hostess. I was able to step out in fear and keep going. I found that beyond fear, there was insurmountable beauty. This is where the art of gathering began for me.

In 2015, inspired by another Ambassador, I hosted my first photo shoot. My goal? To bring women together and capture some beautiful photos that made each woman feel seen and lovely. So I invited the women who had been my Trunk Show Hostesses during my first few seasons as an Ambassador, hired a photographer, and hoped for the best. It turned out to be a blast, especially since we were all moms who rarely, if ever, spent time behind a camera feeling beautiful. This gathering helped me understand the importance of making women see how beautiful they truly are. 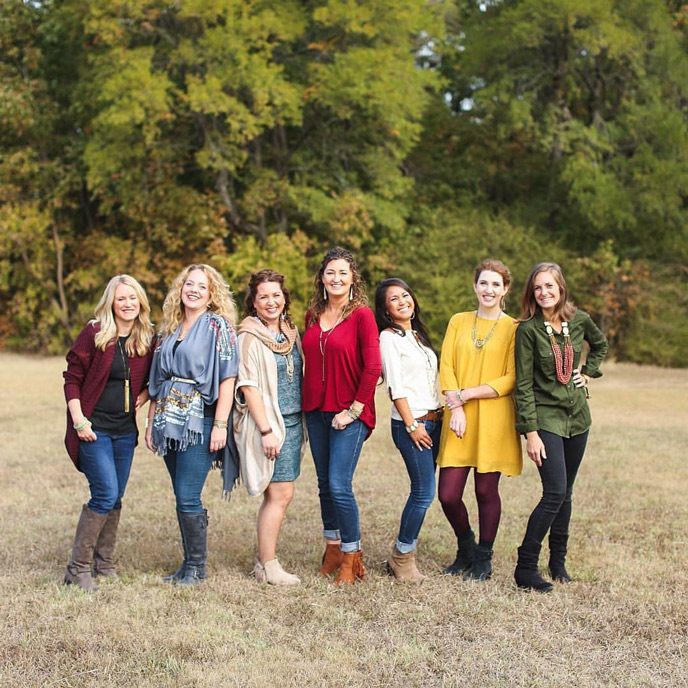 The Power of Creating Together

As I became more intentional about bringing people together, my gatherings began to evolve. I wanted to invite guests to change the world and get creative while doing it!

Inspired by Noonday’s Artisan Partners in Guatemala, I wanted to learn how to weave. @knotsocookie is a local weaver in my community so of course I had to contact her and ask if she would partner with me for a weaving workshop. It was a fiber filled day that ended with beautifully woven art pieces and a new skill set. 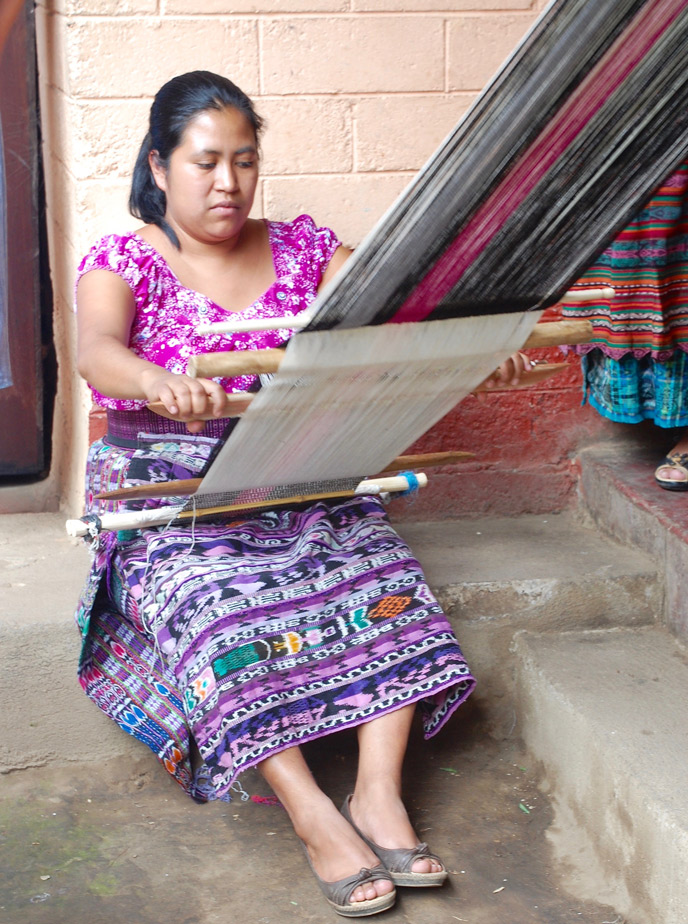 An Artisan woman weaving in Guatemala 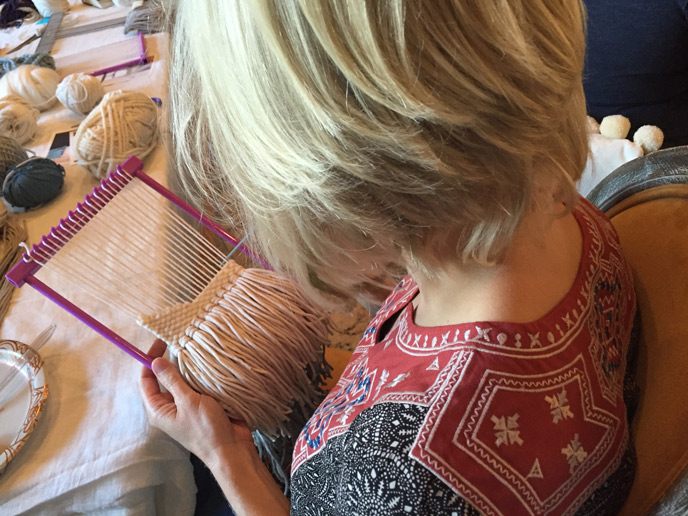 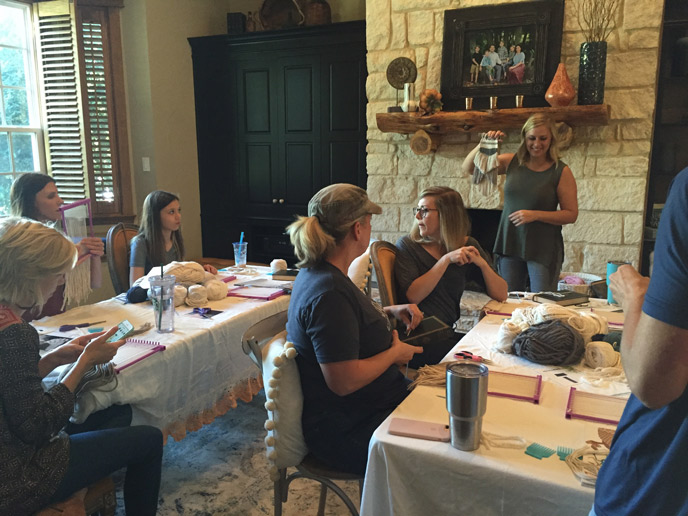 Women learning to weave in Texas

Later, my obsession with succulents lead me to host a terrarium building workshop. For this experience I supplied all of the materials needed to build a terrarium. It was a huge success! Women learned how to build their own terrariums and shopped Noonday Collection gifts for Mother’s Day. 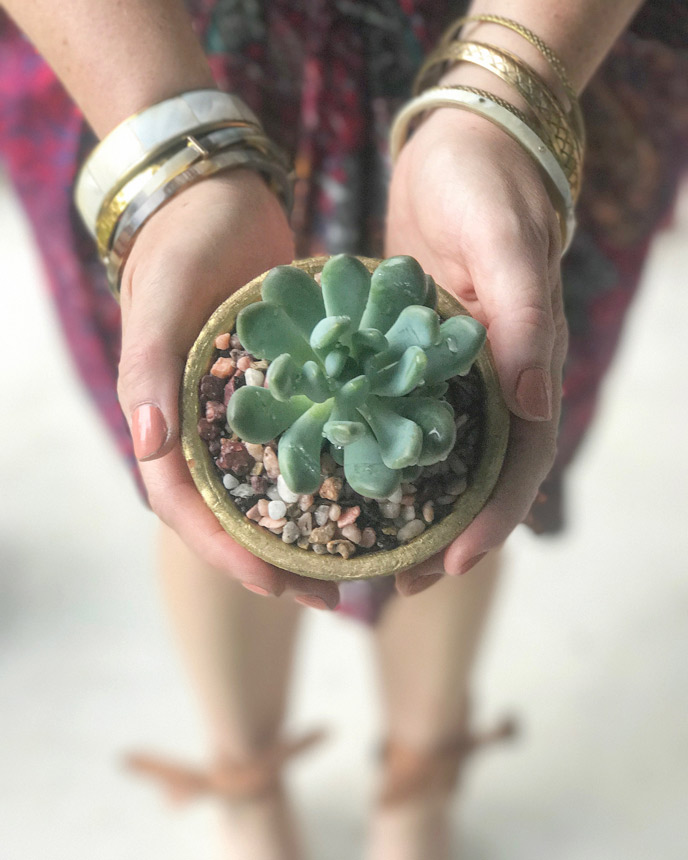 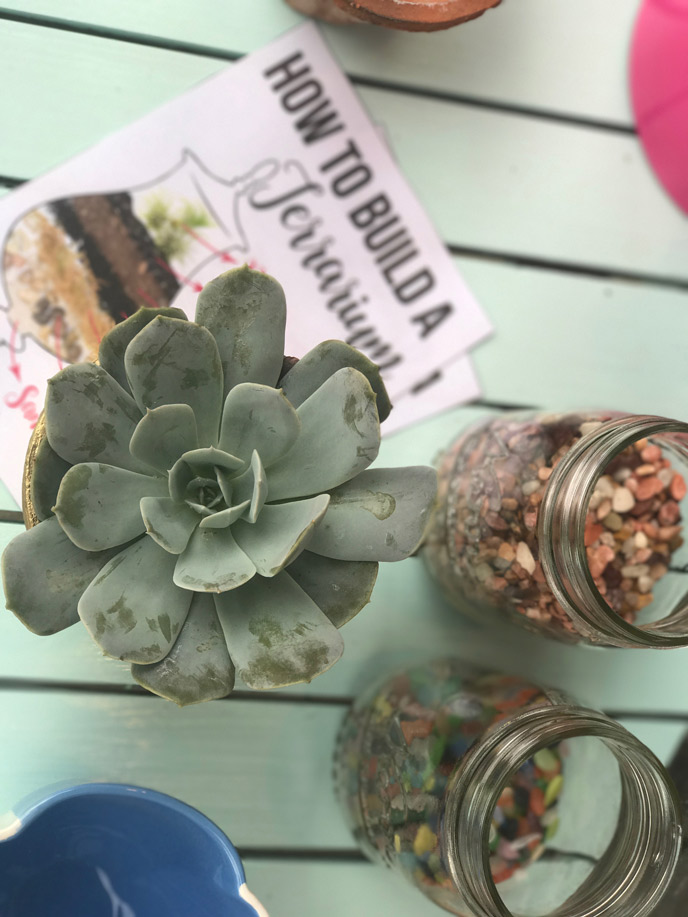 Bringing Women Together Through Style

Not all of my gatherings are crafty. I met a new friend for lunch who was starting a business as a professional stylist. She agreed to come out to my home and do a style workshop. She inspired us to always start with the shoes, construct an outfit in threes, and only fill in the gaps of our wardrobe when things are worn out or do not fit. I think every woman took away a great style tip and learned something new that night. 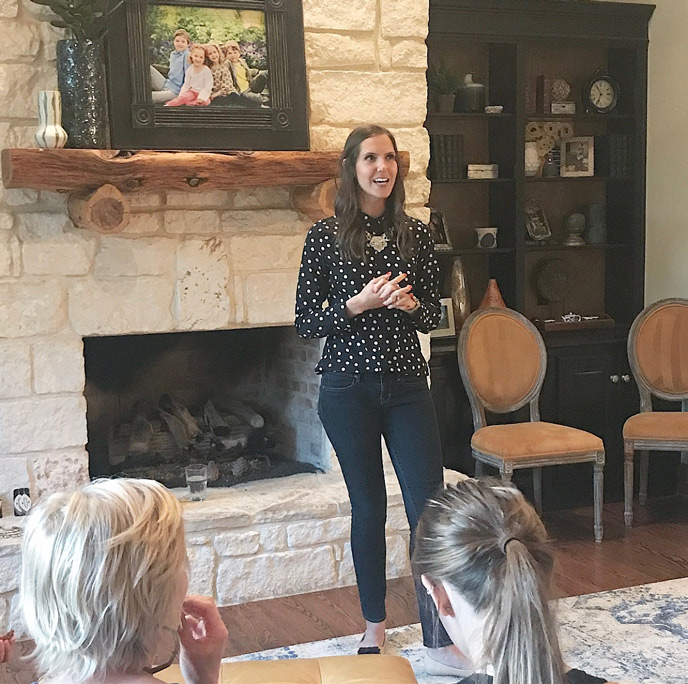 For the holiday season I like to make sure workshops are relevant and the crafty part has real purpose for my guests. To this end, I hosted a wreath making workshop at a local flower shop. Every woman made her own wreath to proudly display. Hearing the trepidation of wreath making, watching them work and then seeing their smiles when all was completed really made my night. 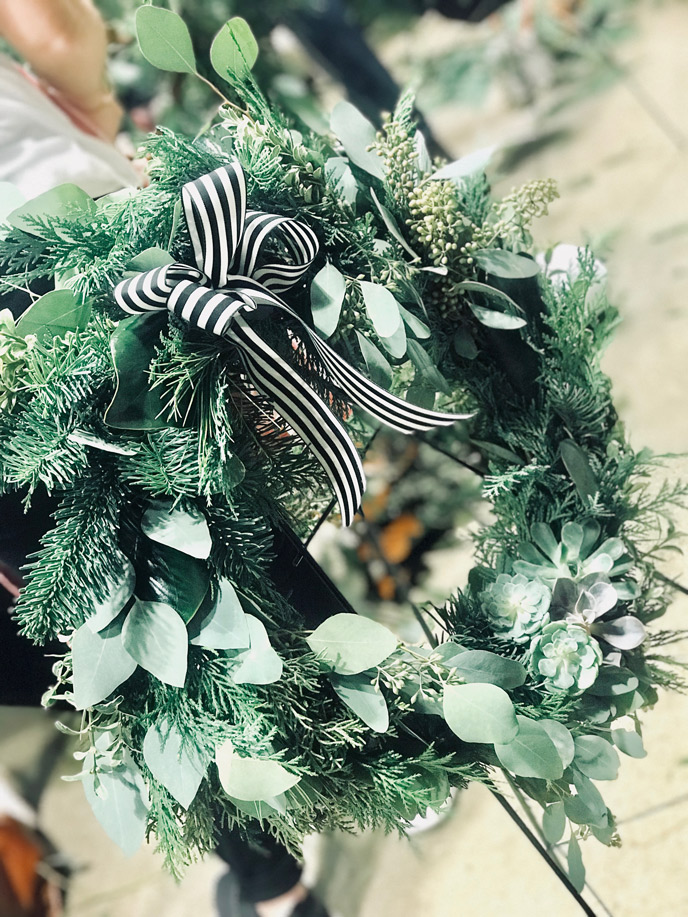 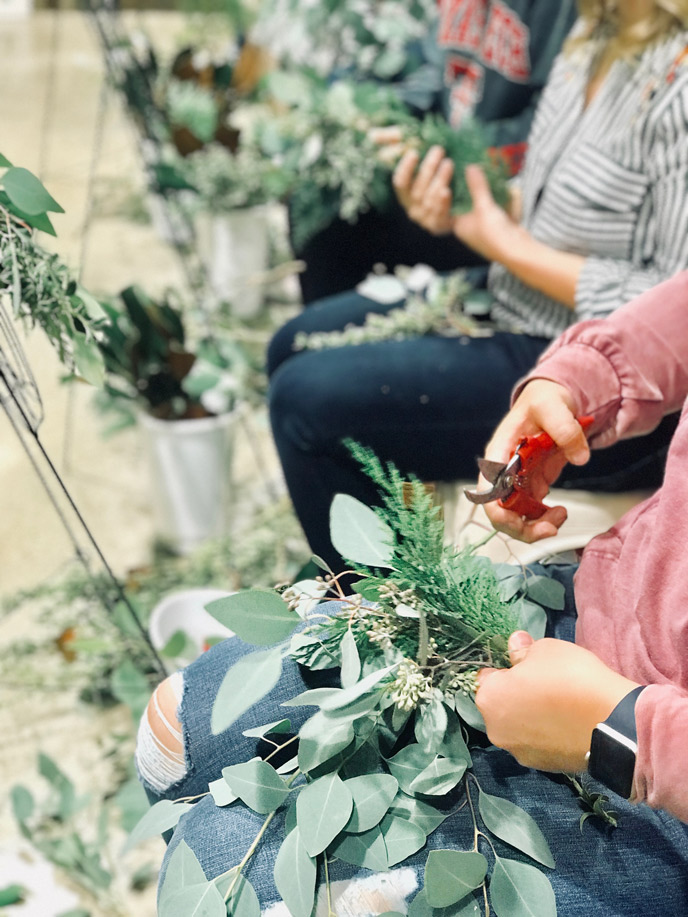 Another holiday workshop I hosted was a shop and craft Trunk Show, where guests were able to both shop for handmade gifts made by Noonday’s Artisan Partners AND make a tassel or pom keychain or five tubes of organic lip balm with essential oils. Everyone walked away proud that they had actually made some of their own gifts. 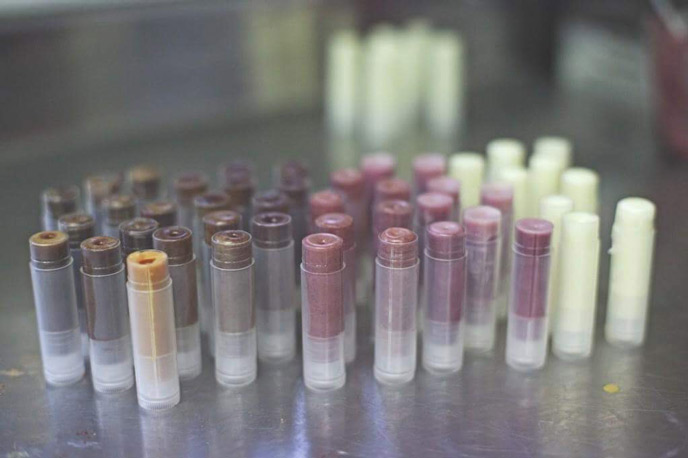 Last month I hosted a “Make a Purchase. Make a Succulent Pumpkin.” workshop. It was a big hit with my guests and nearly everyone got a jump start on their gift shopping. In addition to that, everyone walked away with an adorable pumpkin succulent to add to their fall decor. 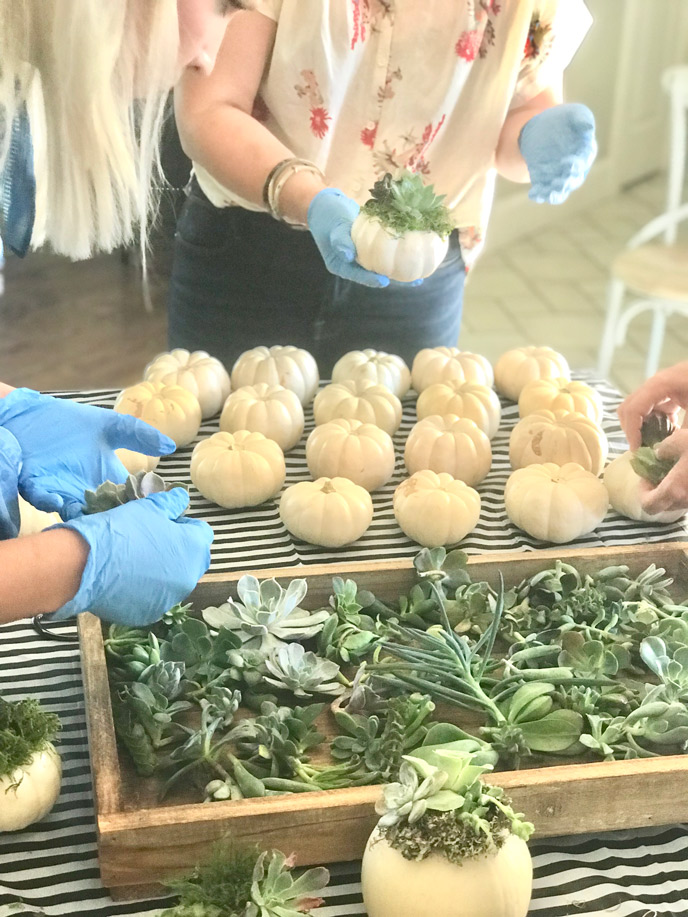 Recently my husband and I collaborated for a bourbon and brisket event. We wanted to raise money for a water well in India. I visited this community in India back in 2016, and he will be visiting this same community of people in three weeks. Through Trunk Show purchases and donations, we were able to raise enough money to build another water well! Every Noonday Collection purchase creates dignified work for Artisans across the globe—and I love how the purchases from this Trunk Show were also able to provide clean water for a small village in India! 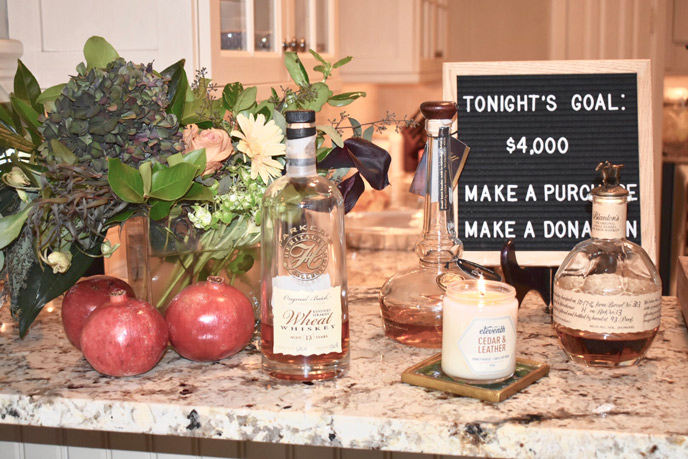 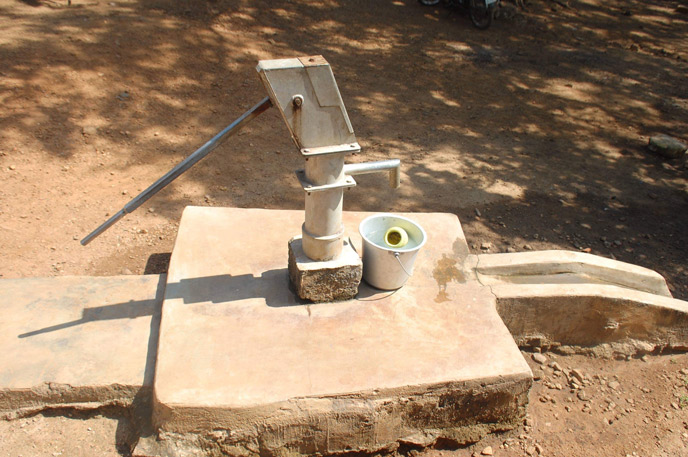 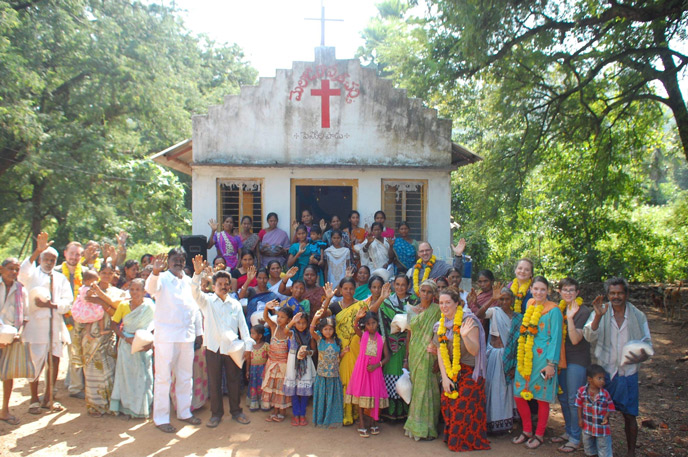 After years of partnering with Hostesses who gathered for Trunk Shows in my community and hosting my own events, I have met some real world-changers. We’re not all changing the world from the same platforms or doing it in the same way, but we are gathering. With this list of “do-gooders” in mind, a few friends and I decided to meet up once a month. This is a very simple gathering of people in my community who run non-profits. Being able to sit down, united under the purpose of serving the most vulnerable populations on the planet, has been a breath of fresh air and true inspiration. 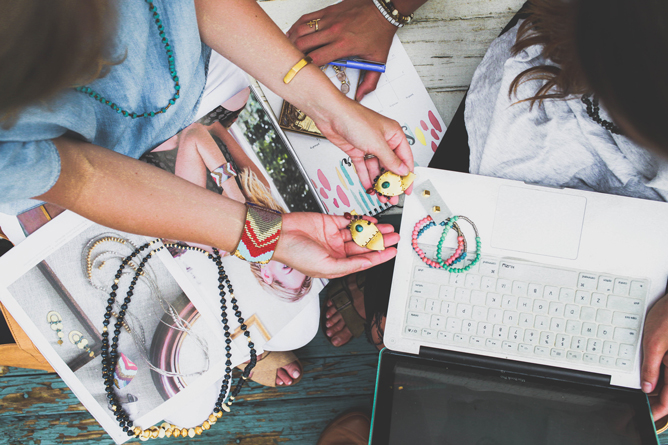 Are you ready to go scared? Not sure where to begin with this whole “gathering people” thing? From my experience, people love to make an impact both with their time and money. To this end, let me suggest that you start by hosting a Noonday Collection Trunk Show this holiday season. There really is no better way to begin your artful journey of gathering people, all while styling your friends and changing the world!

I cannot help but reflect on how I got to this point. The point where I am gathering with people who are leaders in their communities, who are truly changing the world. The ones who have not only moved off the couch, but who sold it for the benefit of those they serve. Where would I be without my role as a Noonday Ambassador? Without the Ambassador opportunity I would have NEVER launched myself out of my comfort zone of wine, chocolate and Netflix in order to go scared. In the beginning I was motivated by creating opportunity for our Artisan Partners. But soon I realized I was motivated by something else, too. I was motivated by the people around me and the power of gathering. When we gather together, we are able to form remarkable connections to each other, inspire each other, and even change the world together.

Erin Abbott has been a part of the Noonday Collection community since November 2014. Since then she has hosted and gathered many women in her small Texas community. As a woman who deeply values the stories behind imperfection, Erin enjoys raising her four imperfect children, alongside her not quite perfect husband, while modeling a beautifully imperfect life. 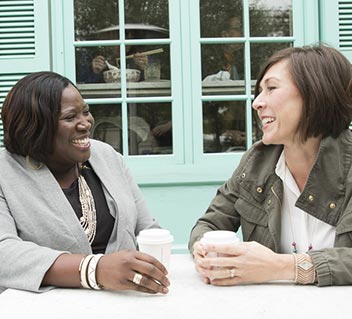 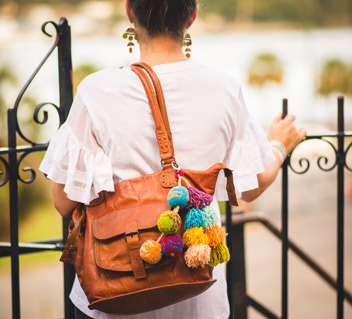 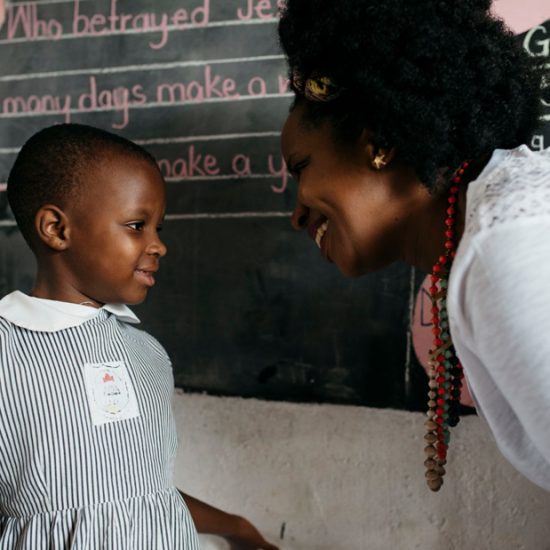 Grad & Teacher Gifts: 6 Ways to Gift with Meaning This Season