Ambassador Travel Journal: Her Dreams Matter as Much as Mine

Katie Beard is an Ambassador from Nashville, Tennessee who recently traveled to Uganda on an Ambassador Trip. While there, Katie and the other Ambassadors on the trip enjoyed a time of community and connection with the Artisan Partners they advocate for through their Noonday businesses. Read on as Katie shares some of the stories of transformation behind our Ugandan collection.

Her dreams matter just as much as mine.

When we first arrived to the workshop on our first day in Uganda, we were greeted with jovial dancing and hugs filled with love. We quickly joined in, shaking our booties as best we could, but still not quite as professionally as our new friends. Dance has always brought a smile to my face, but I turned to my ambassador sister Sara an hour or so in and shared that my face was already sore from smiling so much. When we turned back around the drums started again and I asked “What do you think is about to happen?” she quickly replied, “I don’t know, but it’s gonna be good.” 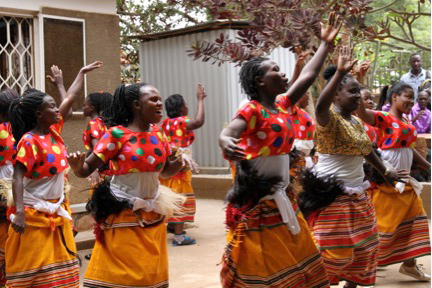 Testimony after testimony, broken up by more dancing, filled our first day with the heavy and profound realization that joy and pain are not enemies, but necessary peers. This continued juxtaposition of joy and pain set the stage for a week filled with dreaming aloud and holding tightly to stories shared with us, individually and collectively.

Mama Sham shared her story of paralysis caused by a lifelong sickness she has endured. She stated she lay on her floor for three days before being found, immediately calling Jalia and Daniel for help. After being driven to multiple hospitals, one finally accepted her but required payment before she could be admitted. Because of the emergency assistance funding from Noonday Collection, Jalia and Daniel were able to provide the funds necessary to cover Mama Sham’s two necessary surgeries. Mama Sham is now back to dancing, quality controlling, and leading at the workshop. 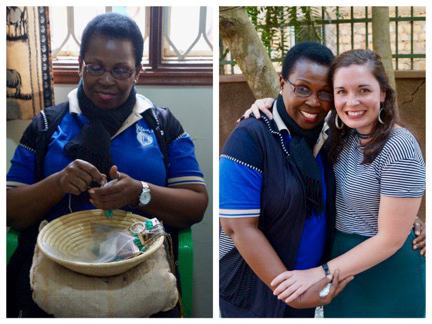 Latifa also shared that her child is now well and she was recently able to purchase her mother a home! Nehma’s life, in her own words, was once “very bad” and she felt “worrisome” but now, her children are in school and she is encouraged daily by her work family. Her daughter now has aspirations to become a doctor. Isma stated that he had TB last summer, but because of the grant given by Noonday Collection for medical emergencies, his sickness was soon treated. 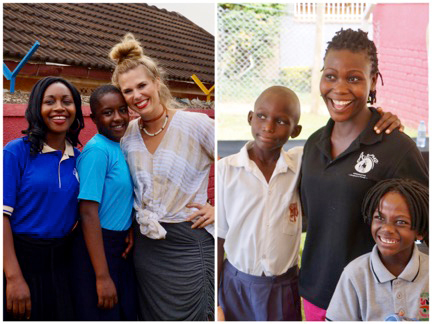 (Left to Right) Nehma and Latifa

Throughout our time in Uganda, it was readily apparent that the leadership of Jalia and Daniel, the orders from Noonday Collection customers, and the trust developed through these important relationships continuously speaks hope into the workshop in addition to a sense of ownership for everyone’s success. During our evening celebration dance party I spoke (and laughed and danced) with Rehema and Somalie. With little prompting, they shared they had never had a job this good.

Each visit to the workshop, I found Somalie and Rehema and laughter soon followed. We took photos and connected details of our lives, like the fact that Somalie’s daughter’s name is Kate. They asked me if I liked my job and I said yes and thanked them for their talented, diligent work that gave me the opportunity to have a job I love. On the last day, as we took polaroids and promised not to forget one another Rehema gave me a hug as I tearfully said goodbye. She said “be strong, don’t cry” as she herself became teary-eyed. 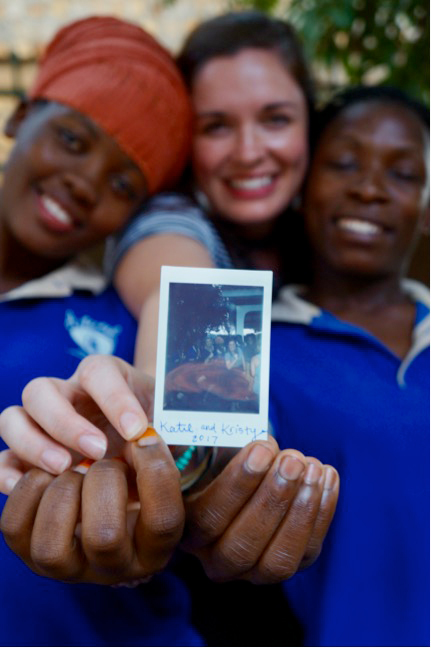 (Left and Right) Rehema and Somalie

The heavy juxtaposition of joy and pain weighed on me during our time in Uganda and even now as I write this. Hearing stories of sickness, paralysis, and trauma coupled with testimonies filled with hope, love, and dancing produces a whirlwind of emotions inside my heart even now.

Dreaming is a privilege, this I have learned. In communities where jobs are scarce and justice is far away, expectations for the future can even be a privilege. One day as Jalia spoke she said, “Before starting this business I had learned not to expect much… I grew up where you get breakfast but you don’t get lunch.” Later in the week she asked aloud, “How can I be struggling for food one day then having thousands of sisters who care?”

This is “her dreams matter just as much as mine” in the flesh. 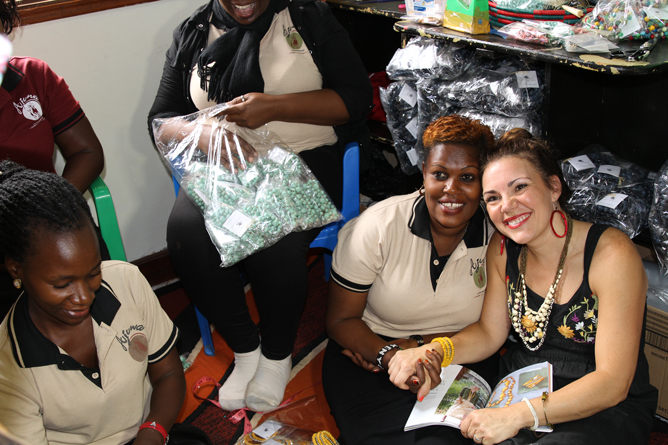 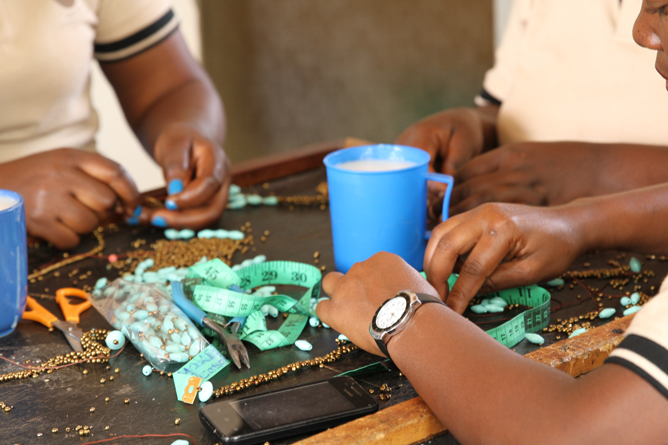 Noonday Collection holds thousands of stories of Artisans hammering, rolling, dying, cutting, tying, assembling, and creating the pieces we so proudly wear. Next time I wear a piece I will know “wear their story, share their story” is not just something we say, it is a calling to recognizing that across the globe lives a woman whose dreams matter just as much as mine. 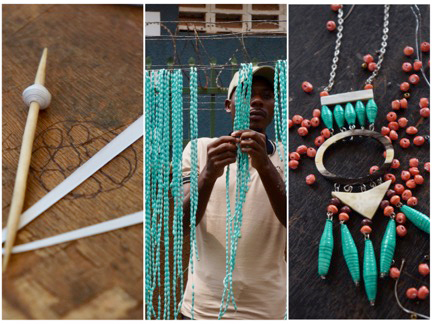 Jalia’s parting words to us on our last day included a humble rallying cry: “You don’t have to be perfect. You don’t have to be strong… we don’t have to fix it all, but we have done so much.” It was like she spoke directly to my sometimes anxious heart, inviting me to share the honorable burden of building a flourishing world without pressuring myself to do it perfectly. It is through advocacy, Trunk Shows, and selling beautiful pieces that our community of fiercely devoted Ambassadors, bold Hostesses, and incredible customers build a flourishing world where children are cherished (just like Latifa’s), people have jobs (like our friends Nehma and Isma), women are empowered (just like Somalie),  and we are all connected (including you).

As one of my favorite duos often sings (and my dear ambassador friend Sara Jaeger spoke on day 1) “the battle rages but the war is won… oh there’s hope for us. I don’t know what’s coming but I know it’s gonna be good.” It’s been seven years since Jessica Honegger first partnered up with Jalia Daniel to create dignified work for people who need it. In the next seven years, I hope more testimonies are spoken as even more jobs are created. I can’t even dream the goodness that will follow, but I know it’s gonna be good. 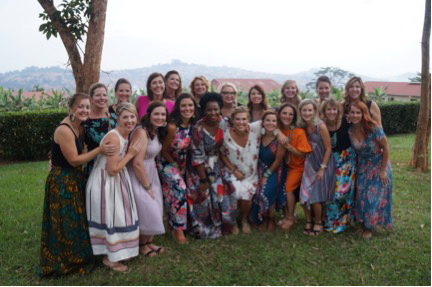 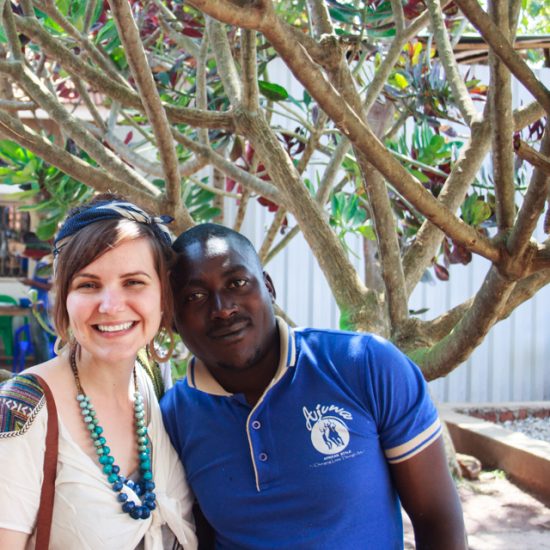 Ambassador Travelogue: Style Made with Love in Uganda 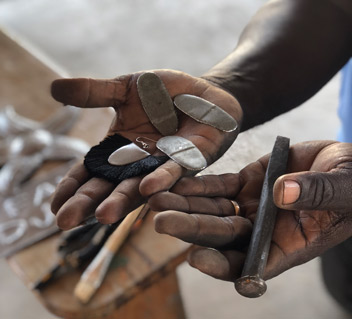