Ambassador Travelogue: Stitched Together in Peru

I’m not sure how I had spent 41 years on this earth and never traveled out of the country, but when the opportunity to travel to Peru with Noonday Collection arose, I knew it would be an adventure. My second day ever out of the United States, I had the opportunity to meet an incredible Artisan Entrepreneur named Juan who is the talent behind much of Noonday’s alpaca winter collection. I jumped into our shuttle bus like a tourist excited to fill a scrapbook. Up until this point in the trip, my first international experience had been, well, storybook: an adorable hostel, fresh bread and coffee in the morning, and inspiring fellow Ambassadors sharing wisdom and laughs. It was a dream, really. 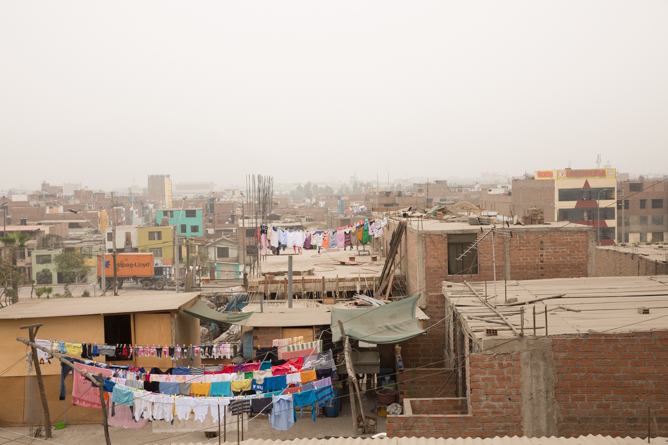 But as we made the trek to Juan’s workshop, I quickly realized we were trading the tourist experience for a very different environment. When the bus stopped at the bottom of a dusty hill, the sounds and smells of stray barking dogs was jarring. Curious heads poked out of nondescript dwellings to see who would emerge from the buses. I felt like an outsider. 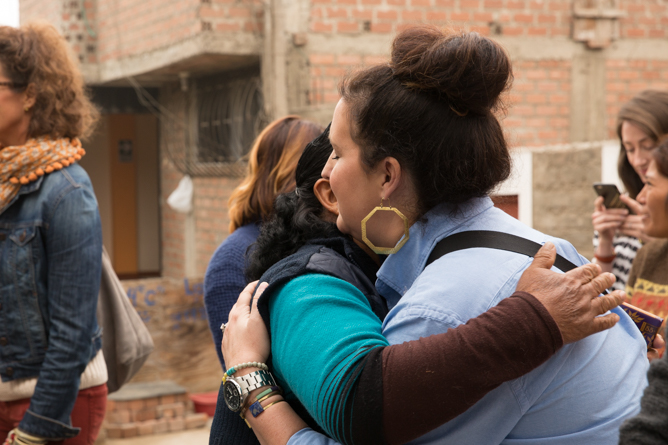 But my discomfort left as quickly as it came when Juan welcomed us into his knitting workshop. The rooms of the workshop were clean and bright, with natural light flooding through the windows. The knitters were smiling and joking with each other. We watched as an Artisan worked quickly and precisely. As I glanced at the table in front of him, I was taken aback for a moment by a cell phone lying there among the work of the day. It felt like a snapshot from my life back home, just as if my phone were on the table surrounded by Noonday work orders and kids’ school papers. Then a quick glance out the window reminded how different my surroundings were. This workshop Juan has created is a sanctuary, an oasis for these artists spinning and knitting beauty. The emotion of that juxtaposition made its way in streams down my cheeks. 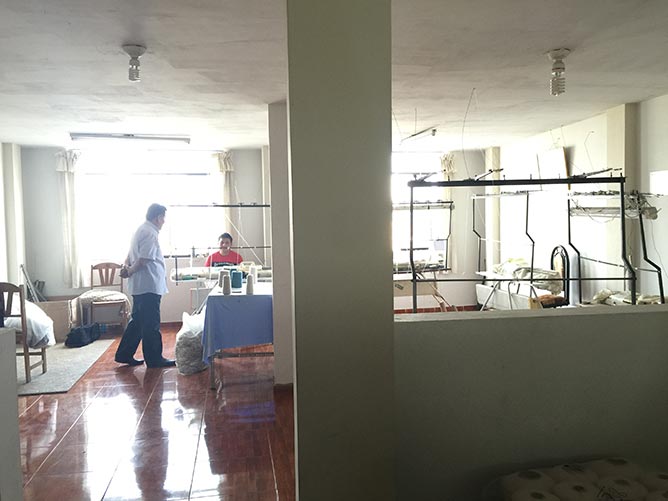 Juan showed us around like a proud papa, and rightfully so. With the help of an interpreter, he explained to us the impact each individual garment has on so many, from the alpaca shearers in the highlands to the home knitters to finishers in the workshop.

As the Ambassador blogger for my trip, I had the incredible opportunity of spending time with Juan one-on-one (plus a translator!) and hearing him share his story. It is a powerful thing to watch someone tell their story, no matter how many words are actually understood. Juan shared with me that he and his older sister were orphaned as children. His sister knitted doll clothes to sell in the market to support them. When Juan was 12 years old, his sister taught him to knit so they would have more to sell. For the next few years, he spent every spare moment knitting in secret, as it was looked down upon for a man to knit. When Juan was 28, he realized that his plans to attend law school and work various jobs to get there was no longer bringing him happiness. Instead, he decided to make a living doing something he loved—knitting. He chuckled as he recalled asking his sister to help him brush up on his skills. 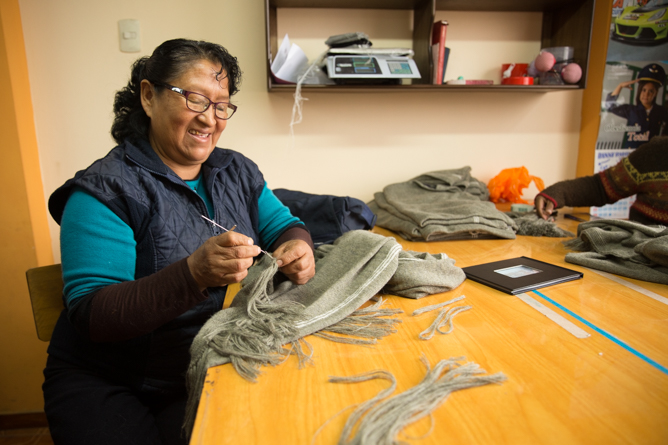 While Juan now focuses more on managing than stitching, he is eager to lend his talents at the loom or knitting when help is needed. His face was serious but softened quickly when he spoke of his role in the lives of Artisans and the people of Peru. He lit up talking about providing for his children as a single father and how his oldest son is studying business to join him one day. 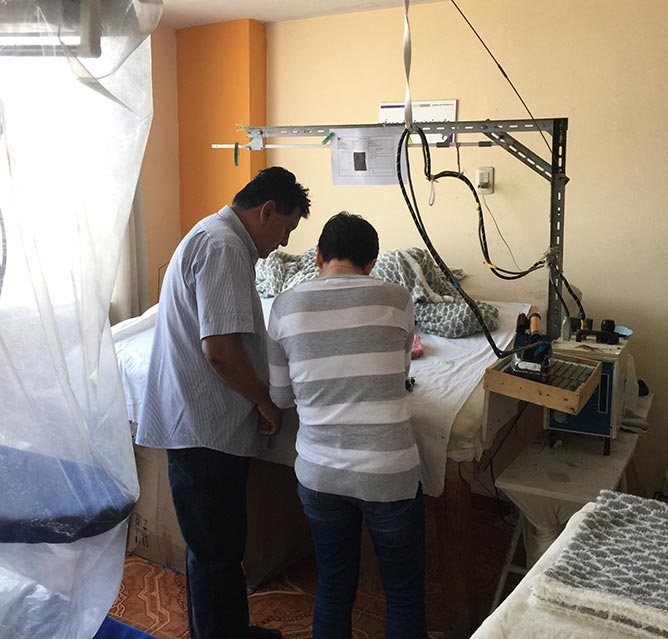 I asked Juan what he wanted Noonday’s customers to know, since for many of them, their Noonday scarf or arm warmers were as close as they would ever get to his quaint Peruvian workshop. Only a few days earlier, that was as close as I had ever been. Juan responded by saying,

“I want them to know how hard we work to make something beautiful for them—something that they would love. And that each piece tells not only our story, but the story of every hand that has touched it. It speaks of the people of Peru.” 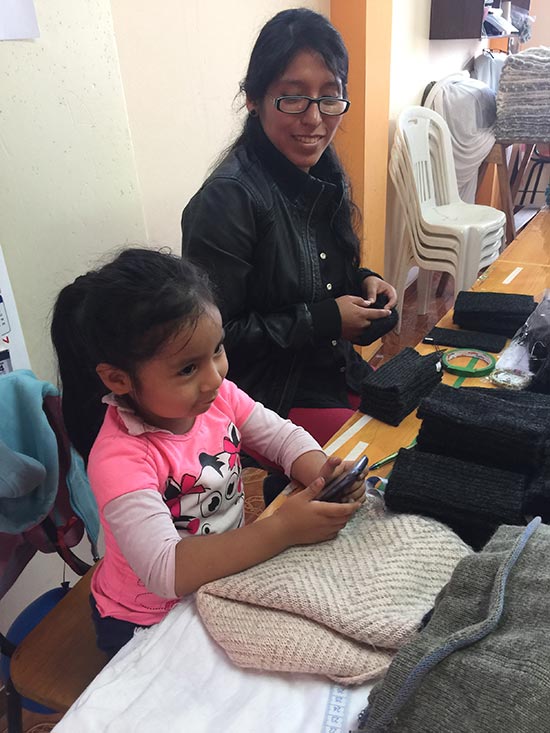 During our visit, one of my fellow Ambassadors remarked that several master knitters at her Trunk Shows had complimented the Peruvian Artisans’ workmanship. Juan’s excitement and pride in his work was immediately apparent. He quickly shared the story with the other Artisans in the room, and a wave of smiles emerged. Clearly, Juan isn’t the only one proud of the finished product. When I asked what his shop meant to the community, he shook his head. Many neighborhoods in Lima are dangerous, so he keeps a low profile for the safety of his Artisans. But he added with a smile, “The knitters know where to find me if they want work,” and heads nodded around the room. 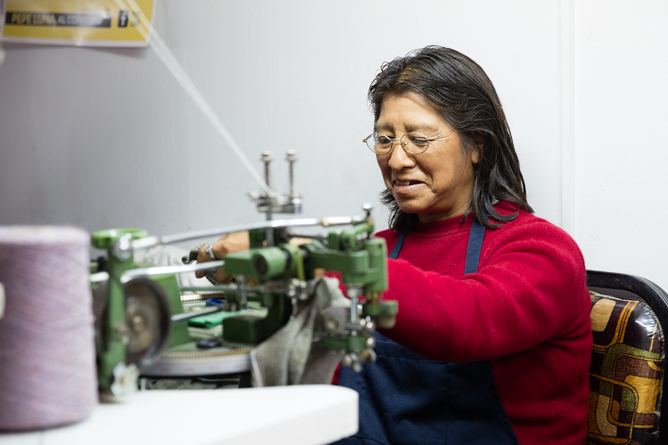 Juan thanked us for the jobs our work as Ambassadors provides, and we in turn thanked him for creating work for us, too. And in a way that I had never experienced before, I got it. The circle, the #bettertogether, the reaching of hands across the globe to build a flourishing world. These stories and this impact are what unite us as Artisans and Ambassadors, Hostesses and customers—and none of us could do it without the others.

Want to travel with us next year? Launch your Ambassador business and you could earn a trip to visit our Artisan Partners across the globe! 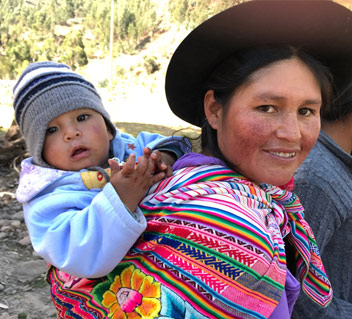 Travels to Guatemala: “We Don’t See Strangers—We See Ourselves”