Adoption and Noonday: Where My Passion Met Purpose and How Twins Found a Home

Much like the story of the company itself, my journey as an Ambassador for Noonday Collection began with adoption and continues to have adoption woven throughout it. When my husband and I started the process to adopt in 2015, I had no idea that it would lead to owning my own business, becoming an advocate for Artisans and adopting families, or traveling to a foreign country to meet the Artisans to whom I already felt so connected through their stories and handmade jewelry. But, it did. And, oh, what an amazing journey it has been!

I remember the day, as a young girl eavesdropping on my mother and hers, that I learned my grandmother had been adopted as a baby.  I remember asking my mother questions later that day, learning the word “orphan,” and making up my mind that very day to be a part of the solution when I grew up. Twenty-five years later, my husband and I began researching adoption, felt drawn to international adoption, and finally committed to China specifically. I remember the day that I read that 90% of the world’s estimated 140 million orphans have living biological families who tragically can’t care for them. As a mother of three already, I remember my heart breaking again. This time not only for the children but their birth parents.

After traveling to adopt our son in April of 2016, I came home with my eyes wide open to the social issues that turn cherished children into orphans and with my heart afire to do something about it. I sensed that this thing we had just done by adopting was so monumental for our family that I’d also need a community around me that would understand the unique challenges and joys of being a transracial family created through adoption. I also wanted to support other families like mine. It was a great plan in theory, but reality quickly reminded me that I now was a homeschooling mama to four children, and I knew that I’d not be traveling to the vulnerable communities of the world often, if ever. How in the world would I be able to have the impact I wanted to make and to be the change I wanted to see?

Little did I know, the answer was already in the works. At a pre-adoption training with several other families, I had made a friend who would eventually become my Ambassador Coach, Allison. Allison went on to join Noonday Collection to support her own family’s adoption. In May of 2016, I learned that Noonday held Adoption Trunk Shows where the company gives back to adopting families. A family I knew was adopting at the time, so I asked Allison if I could host a show to benefit them. At my Trunk Show I saw the beauty that is Noonday. I saw friends show up for this adopting mama, how they loved the handmade pieces, and how they were not only supporting the adoption, but also strengthening the Artisans’ families with their purchases. I remember being asked why I decided to hold a Noonday Trunk Show, and my answer was, “Why not? It is a win-win-win-win situation!” And that it was–for the adopting family, for the Artisans, for the Ambassador, and for me as Hostess! Another seed had been planted in my heart. Maybe Noonday was how I could help adopting families AND strengthen families around the world, thereby keeping families together in the first place while caring for and earning income for my own.

Three years ago this month, I said “yes” to this journey as Ambassador and small business owner, and I have loved every minute of it. I was even given confirmation of my “yes” when my good friend, Sarah, unexpectedly announced her family was adopting! Shortly after, I learned that a local domestic infant adoption agency was needing more adopting families, namely ones interested in adopting African American and bi-racial babies. Around that same time, my friend, Katie, decided to host an Adoption Trunk Show for an adopting family she knew. I was so excited as this would be my first adoption show and since supporting adopting families was a large part of why I joined Noonday!

The night of the trunk show, as I was setting up my display, Katie began talking about adoption, and I learned that she and her husband had considered adopting a few times in the past, but each time the timing proved to not work out. Bells, whistles, and light bulbs started going off in my brain as I remembered the need I had just learned about a few weeks before. Often birth families like choosing families that share their same values and interests, and at times ethnicity. Not only were Katie and her husband, Jesse, open to adoption, but they are an interracial couple themselves (Jesse being African American and Katie being white) with a biracial daughter.

Those who know me well know that I have a big mouth and relish in the chance to use it for good! I quickly shared that I knew of a great need that they could possibly fill. The whole time Jesse was also in the kitchen with us and overheard our conversation. Soon guests arrived, and we had a beautiful time of uplifting, encouraging, and supporting the adopting mama and were successful in helping them meet some of their adoption costs. But what I shared weighed on their minds that night, and the very next day Katie asked me for the agency’s contact information.

From there, their adoption journey moved quickly! Within a few months, they had been matched with a birth mama, who was delighted to find an interracial couple desiring to adopt a biracial child. Katie later learned that this birth mama was actually having TWINS! And, yes, a Noonday Collection Adoption Trunk Show was held to benefit their adoption! Just six months after Katie hosted, they welcomed their new son and daughter into their family. It was a such a joy to be a small part of their story and to see the gift that an Adoption Trunk Show can be come full circle all because of their yes!

In case you are thinking there is no space for you in the Noonday community, if you are not somehow affected by adoption, or you’re thinking that every Hostess ends up receiving twins on top of free jewelry, let me assure you otherwise. Adoption is just one of the many facets of Noonday’s story. Hosting a Noonday Trunk Show is about creating spaces for meaningful connection and shopping with a purpose. But I will warn you–those meaningful conversations have been known to become life-giving and world changing! If you see value in advocating for the vulnerable, working toward something bigger than yourself, feeling connected to women near and far, and growing as a person, there is a space at this table for you as a customer, Trunk Show guest, a Hostess or even as an Ambassador. Consider this your invitation!

Marla Yates is not only an Ambassador but also co-owns a franchise with her husband, Tim, in the Houston area. When not homeschooling their four kids or running two businesses, Marla can be found volunteering for Love Without Boundaries or reading. Her favorite style consists of graphic tees and paper beads. 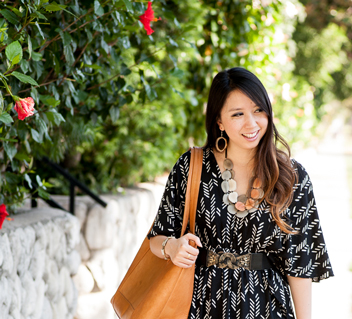 The Best Accessories for Summer Travel 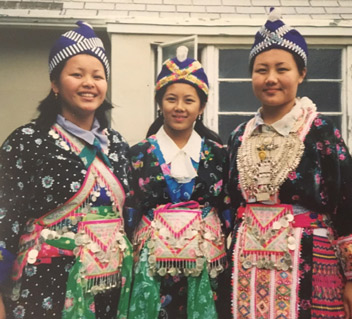 Stockings with Story: The Rich History of Hmong Fabric